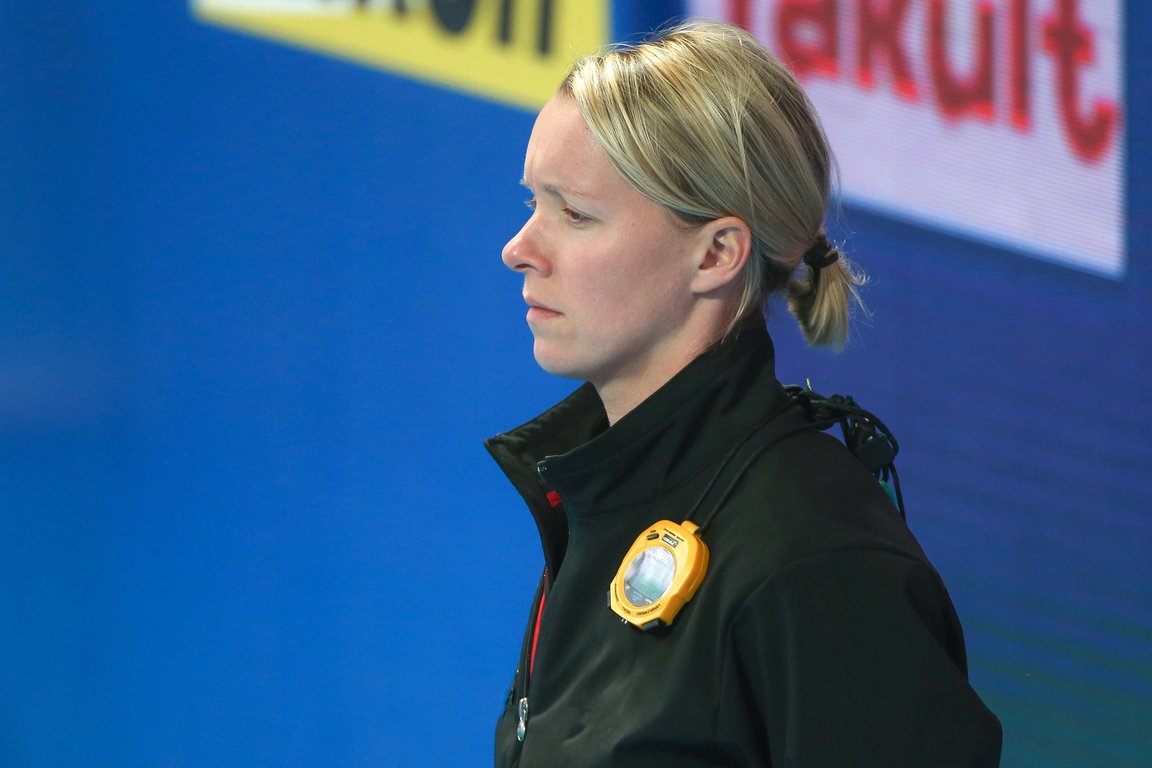 Mel Marshal is the coach to Swimming World Record Holder Adam Peaty.  Not only is Mel Marshall England’s most decorated female athlete ever at a Commonwealth Games, winning 6 medals in Melbourne 2006 and been a member of Team GB in two Olympic Games, she is also a pretty good Coach! After coaching Adam Peaty to Commonwealth and European Gold and achieving a World Record with him, as of October 2014, she became the first ever female coach to win British Swimming Coach of the year.

?Mel is leading the way for female sports coaches in the UK and after retiring from competition in 2008, she has gone on to share her wealth of knowledge and experience through her coaching, swimming camps and charity work.? The lessons learnt as an athlete are ones she continues to share and is passionate about helping athletes realise their potential.

Congratulations on your award! As you?re the first woman to win such an award, do you feel any pressure as a coach now?

No not really. I think the pressure was before probably trying to pave your way for the first time, I suppose I almost felt relief when I got that award! It’s been a rollercoaster 6 years and I worked really hard. So no, no pressure, just relief.

When you say it’s a relief, is that a relief for the fact that you have proven yourself? Is being a female coach something you are conscious of?

Yeah probably that I have proven myself, but I don?t see that because of my identity as a female. I see the pressure from being an elite athlete and then going into coaching. I had to prove that I can deliver those results and my philosophies have allowed good performances to come through. So not relief because I am a woman in a man’s world, that’s not the case. It’s more of a starting out coach wanting to turn to the biggest arena.

Do you think you have a lot more to prove because you were such a successful athlete? You almost have to match your achievements?

Yeah I think that was the biggest pressure I felt. A lot of people in the coaching world probably think that when you leave being an athlete, what do they know. They think you can’t make it as a coach, that’s how I felt. So I was just wanting to prove that success is a formula, it’s made up of character traits that you build up over the years. It’s filled with determination, resilience, hard work, never giving in. No matter what avenue or what vehicle you chose to put those traits into, you will get success in each arena you work in because of the fact that it?s about you and your skills and your skill set. 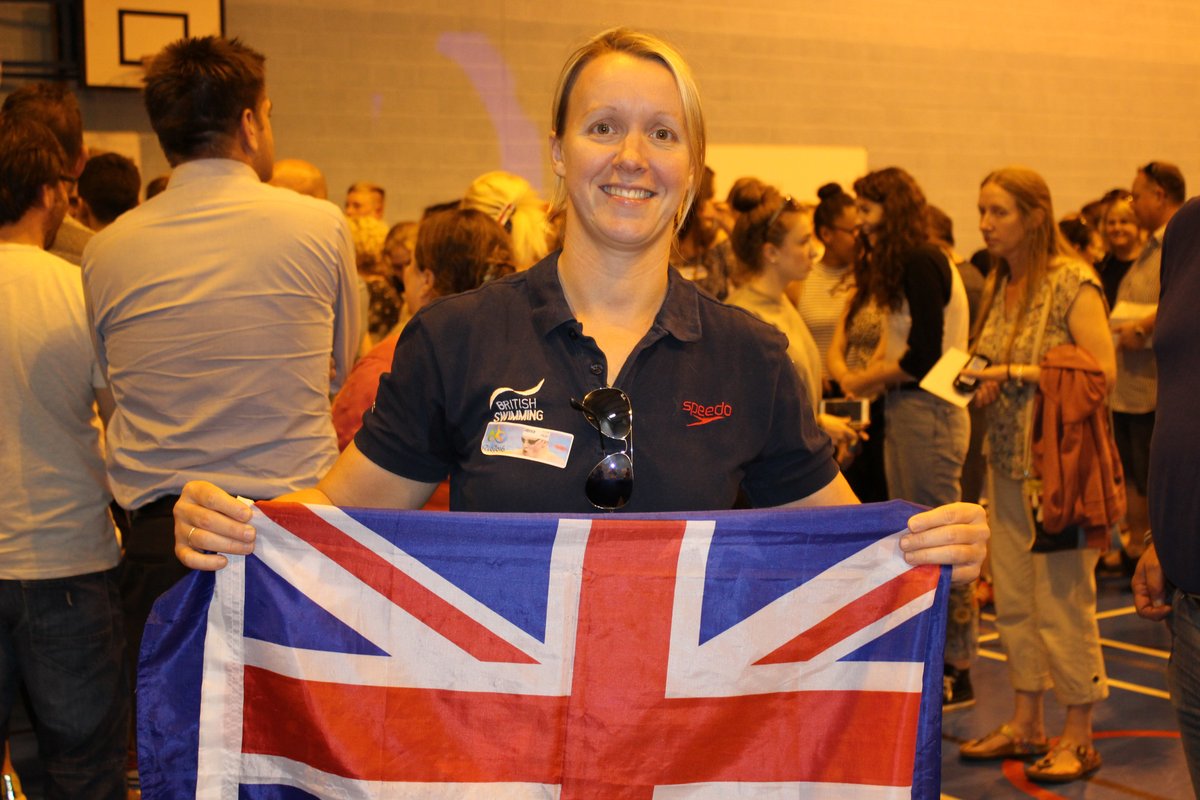 Do you feel it is essential that to become an elite coach, you have to have competed at an elite level?

I don’t think it’s essential at all, I really don’t. For me [my experience of being an elite athlete] certainly [has] been a useful tool. To work from my experiences within big arenas such as the Commonwealth Games, I feel very experienced with what?s required of that environment. And that?s been a big useful tool for me. I always say that if you want to go into war, do you want to take a solider that’s been there or somebody who steers from the back lines. Most people would prefer going into war with a solider. But that’s not to say that?s for everybody. You know look at Bill Furniss, he didn’t swim to a high level but yet he coached a double Olympic Gold Medallist [Becky Addlington].So for me it’s valuable, but it’s not essential.

Do you think your athletes respect your opinion slightly more because you?ve got that history to back it up with?

Yeah I think they do. That’s certainly been one dynamic of my coaching that they have been able to tap into and I have been able to be a mentor as well as a coach. I gain instant respect from athletes because I have been there and done it. But I hope to keep that respect by having the coaching skills necessary to deliver the performance, support and environment they need for them to achieve.

I’m not sure; I never really asked them about that sort of thing. I guess in terms of athletes, I’ve coached Adam Peaty and he is has gone on to achieve miles more than I have ever done and he is only at the start of his career. I’ve probably achieved more as a coach already than I ever did as a swimmer! Which is good! I hope I’ve been an inspiration in the sense of I’ve been through most things in sport. The good times, the bad times, the rollercoaster, the sunshine periods and the rain periods. So hopefully I’ve got a wealth of experience that I can share with them and they look up to that as something they can draw upon and use.

What inspired you to become a coach after you retired from competing? Was it something that you had always planned on doing or something you fell into by accident?

I think for me, the fact that I had learned so much in my swimming years and I loved the sport, I just wanted to make sure that I gave back. It seemed stupid to have learned all that I learned and not pass it on. I always wanted to be a PE teacher when I was younger, so I combined the two and went into coaching.

Was there a particular coach that guided you in your early coaching career?

Did you find there were certain things that you couldn’t tell your male coaches being a female athlete? Did you ever feel you needed support from a female?

I’d say no probably. I actually think there needs to be something explored in terms of females coaching males and males coaching females. I think that sometimes males approach to it is good and males quite enjoy being coached by female as well.

Have you come across any problems as a female coaching male athletes? Do you have to adapt your coaching dependent upon the gender of athlete?

They are different creatures in terms of the motivation etc. Females need a lot more encouragement where as guys tend to need a lot more direct feedback. There is definitely something along there, however it is not just gender specific. I have some males that require reassurance and I have some females that require direct feedback. You can have the most complex male character who would fall to pieces if you were direct with them, and then you could have a complex female character that f you didn’t provide them with the right feedback. I think it’s just dealing with them as individuals and taking their gender into consideration as well.

What inspired you to become an Olympian?

I was just really determined from a young age. My Mum taught me when I was younger to make the best of what you’ve got and she gave me deep rooted fearlessness to go out and give the World a good go and that’s what I did. I’ve always wanted to be the best. Not in terms of beating everyone else, but I want to be the best I can be. I think that started at a very young age. I was very competitive and always wanted to win. It just built and built and built.

If you could only give one piece of advice to an aspiring female coach, what would that be?

What are your aims for the future and your coaching career?

I just want to keep helping athletes and finding the answers that are needed to help them get the most out of their performance. I’m not interested in big bucks or big jobs, I just want the opportunity to help athletes realise their potential. I love working with people that you can really help and really change, really support and help them move on. And as long as the good athletes keep coming to me and I can help them move forward, that’s the best job in the World!

Does that feeling and buzz you get from watching an athlete achieve, match the buzz you got as an athlete yourself?

It’s twice as good! As an athlete you feel true elation and happiness about what you achieved and proud of how hard you worked, but as a Coach you feel utter relief that you were doing it right and you were supporting them right.