Melissa Barbieri is the newly appointed Head Coach to the Heidelberg United women’s team, after recently retiring from being the Australian Women’s Soccer National Team Goalkeeper and Captain.

Having retired in 2015, she?played her first international match for Australia in Canada in 2002 and became a backbone of the national team, being named captain in 2010. Winning the Asian Cup in China in 2010 was one of the highlights of her time with the Matildas, followed by playing?in her fourth World Cup after giving birth to daughter Holly.

In October, Melissa was announced in her new role as coach in the Women’s National League starting in 2017. ?We asked Melissa about her new found coaching career and what she aims to bring to the team for the 2017 season…

Congratulations on your new role as Coach to Heidelberg United! After such a fantastic playing career as Goalkeeper and Captain for the Australian National Women?s Team, has it been quite a natural transition to becoming a coach?

I thought the transition would be easier to be honest. The coaching part is natural. The bargaining and swaying of players’ minds is definitely not natural to me. I have a hard time with lies and bluffing and it’s not getting me very far with my recruitment process. But I guess ya all about learning and growing and I hope it’s not something I learn how to do but to learn to do in a manner that is consistent with my beliefs and my integrity.

For me it has been a massive decision to coach. I have a young family. I have a husband who already has supported me through years and years of financial burden as a player and then I decide I want to coach! Coaching is more time and in most cases… less money.

So now it might make more sense as to why women find it difficult to coach.

The society’s belief that women should be with their children at ALL times. If you do not have your child… then WHO has the child!? Like your partner is not able to cope with their own child or that you are a bad mother because you have left YOUr child with another carer. That’s with women who have children. Women who don’t have children and who have played at the highest level are also at a point where they are almost exhausted from the amount of time they have had to pump into their football with little thanks or remuneration.

Coaching consumes you. It consumes your mind and your spare time and your weekends. It takes a very balanced person to be able to keep everyone happy. This is not a female thing but a coaching thing. Ask how many male coaches have lost marriages because of football… it would be the same for them.

I tried to get my former team mates and managers back involved in the game but they all wanted to be free from football. Just to enjoy it and not be consumed by it. Hard to argue with that.

What lessons from your playing career will you be bringing into your career as a coach and what philosophies will you be keen to in still onto your team?

I have lots of lessons and too many to name here but the most important is. TRUTH.  Whether the truth is hard to say or easy to say you always must say it. A player may not like what you say but they respect your honesty and can work to change your opinion or their own ability or attitude. Not always EASY but simple nonetheless.

My main philosophy will be to make mistakes. Make them and learn from them.
I will not judge you by the mistake you make but the attitude after and how you react to it.

As you are still new to coaching, has it been important to build a network of support around you? If so, can you share with us who is in that network and what roles do they play?

I have so many people I look to for advice and guidance. I was formally linked with Joe Montemurro and Melbourne City through the Football Federation Australia Female Coaching Mentor program. I also use past coaches to ask about certain things I thought were effective in their training. I also took lots of notes as a player. Many times I have had coaches as me for my notes as they never kept copies of their work and they needed it for licenses etc.  Starting line ups etc as well as good coaching drills.

Having come into the sport as a child and retiring last year aged 35, how have you seen women?s football change over the years in Australia and what (if anything) does it need to improve to support female players more?

I have seen the numbers grow. I have seen the minds open and see that female football is just as entertaining as the male side. You just have to stop comparing them.

In 2016 you can play anywhere in the world and girls play with boys up until 14 now. It’s amazing.  Advice: We need more time and energy. The time and energy I see that goes into the men’s game is ridiculous. Volunteers galore. Then for female football… completely the opposite. If you have something happening for the men. Do it for the women as well and see the differences it makes to your club and community.

You gave birth to your daughter in 2013 and went on to return to playing in the World Cup in Canada in 2015 and now starting life as a coach?what tips or advice would you give to other women who have young children and want to keep / pursue a career in sport whether as an athlete or coach? 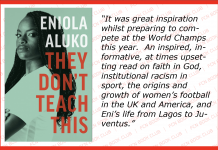 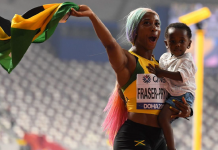 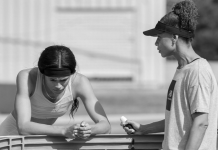