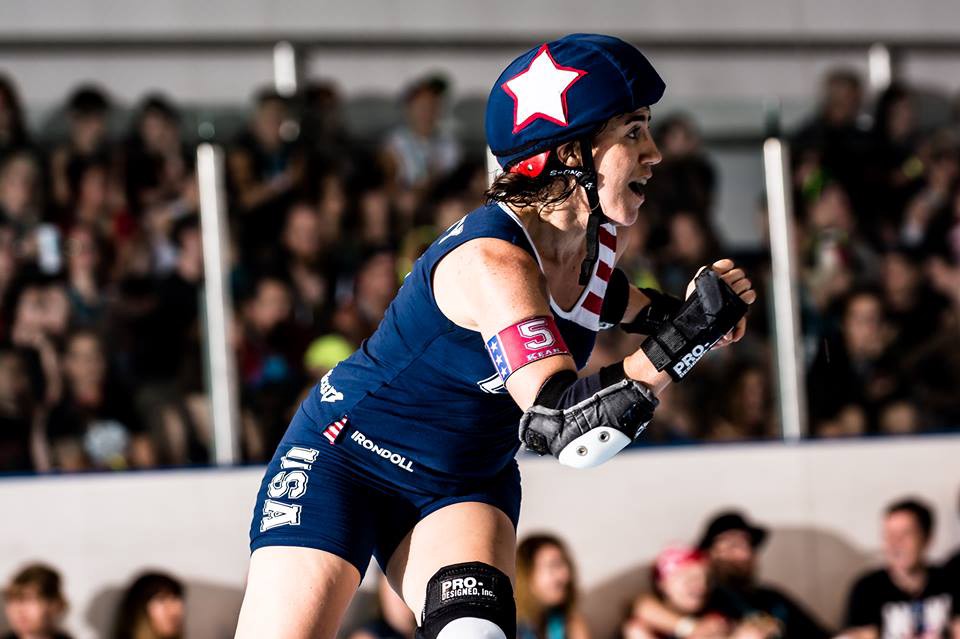 Better known in the roller derby community as Smarty Pants, Nadia Kean has been there since almost the beginning of the resurgence of roller derby as a sport.  Starting on the bank track with Texas Roller Derby (TXRD), she moved to play flat track roller derby with Texas Rollergirls, who consistently rank in the top 10 teams in the world (WFTDA rankings).

She’s been selected for USA Roller Derby (the US national flat track roller derby team) three times running, starting her own business (twice over), and now writing her first book.

Having set the bar for roller derby coaches (and players) across the world, she’s looking beyond the flat track and expanding her focus to look at how coaching can play a pivotal role in bringing women into sport and keeping them active. She recently spoke as keynote and ran a series of clinics at Derby Stance: UK coaching summit and we were able to nab her to talk about pretty much everything under the sun to do with coaching, roller derby, and strong athletic women.

You do a lot of coaching partnerships with other coaches. Collaboration can be tricky. What value do you find in collaboration and what challenges?

I love coaching with others, especially Luludemon of Pivotstar with Camp Elite and Jackie Daniels.

It?s important for skaters to learn from multiple coaches, so when I collaborate and do a clinic with another coach, it gives skaters the opportunity to learn from me and to learn from the other person I am with. I also get to to listen and learn myself, which is so nice since I?m usually the person coaching.

The only challenges we need to overcome are when we have to explain to skaters that it?s really okay if we give them different direction or information than the other coach gives to them and that there are many great ideas.

You recently traveled to England to speak at Derby Stance UK, a coaching summit? what did you enjoy most about being part of that event?

Derby Stance is a unique clinic; no other organization is doing a clinic for coaches only and that is special.

I enjoyed the thoughtfulness that was put into the clinic by the organizers and the coaches who spoke. There was a lot of good information and it was all very diverse.

Many programs are in need of good coaches, but for some reason people forget that coaching is essentially teaching, and people go to school for years to become teachers, but assume that they should be able to just jump right in to coaching, which of course is not true. Derby Stance gives people the opportunity to learn, so that they are not going into coaching without resources.

From your experience, what key differences in roller derby sporting culture exist between the US and the UK?

The big heroes in the UK are London and Rainy City and those are the two leagues that the skaters I’ve worked with seem to focus on and know the most. If you ask skaters to talk about a style of jamming, blocking or game play that they really admire, they are more than likely going to mention London.

It’s great that there is so much pride for London in England, especially. Skaters in the US love London as well, but in the UK there?s no denying that they are the home town heroes. 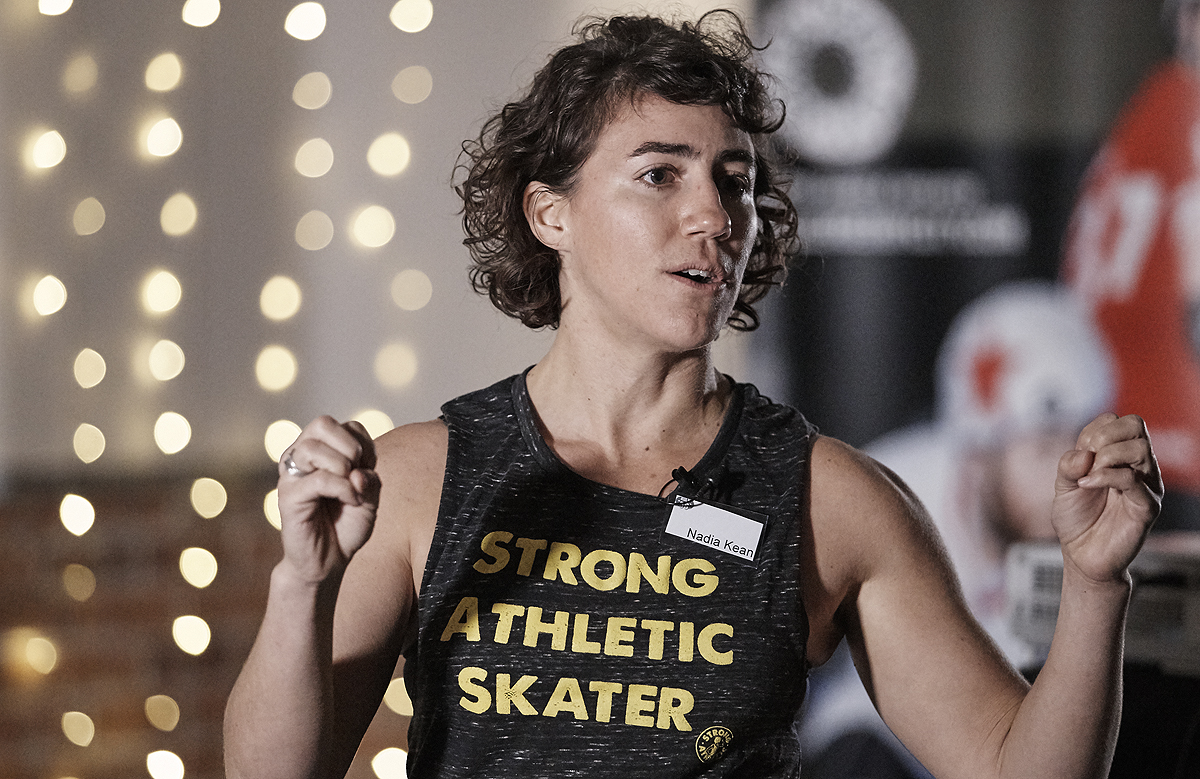 You travel a lot with your coaching business (Get Smarty Coaching) ? what?s the one thing you find yourself telling folks over and over, whichever country they?re in?

I tell people that hiring a coach is doing their league an immense service and a disservice. I am teaching them, which is a service, but I am also taking away their opportunity to learn a concept on their own.

When we learn something on our own, because the process of learning is different we sometimes incorporate the information in a more utilitarian way. When someone teaches us, we are memorizing, which is not always the best way to learn, especially for sports.

In addition to your coaching, you also have a brand that you developed. Can you tell us what inspired that brand and why it’s important?

In the States and many other parts of the world it is very common for adult women to be referred to as girls. In some parts of the world it is a cultural thing, women are called girls and men are called boys. However, there are times when the word is used by adult males to refer to adult females and in those situations I consider the term girl to be inappropriate and derogatory.

I noticed that the women I skated with were referred to as girls and once I started to notice it, it was hard to stop noticing it. I started calling?my teammates, the Texecutiors, a fine group of strong, athletic, women a few years ago. The phrase stuck and it became a joke on the team.

I said it so much a friend of mine, Cristen Perks, put the words on a shirt and I wore it ALL THE TIME. People started to compliment the shirt and ask me where they could get one, so eventually I decided to make the shirt for others, with permission from Cristen. The shirt means something different to nearly every person who wears it. I’ve made other shirts now and they include the words skater mom official queer girl and nasty woman. I feel so fortunate to be part of the Strong Athletic movement and love to hear people’s Strong Athletic Stories.

What’s your favourite coaching story? The one that stands out in your brain and you tell your friends more than once?

I work with some individuals and some leagues continuously over the years, which gives me the opportunity to really connect with athletes and form some really good bonds. They trust me, and that is so important to me. I?ve had people tell me the impact I make on them, when I don’t really realize that is happening. That’s always super nice to hear about.

Last winter I did a postcard writing campaign where people could send me a request and I would write a postcard to a teammate or friend of theirs. I recently received a letter from a woman who told me that after I coached her, the words I said to her stayed with her for a few years and then I ended up writing her a post card, reminding her of how important and strong she was. She told me that those words helped her quit drinking and that she looks at the postcard I sent her every day. Another woman told me that she broke her neck a year ago, and she placed her Strong Athletic Woman tank in a place where she could see it every day and that shirt made her determined that she would wear that tank again and that she would be the words on the tank. I coached her in May and I?m astonished to think of her journey and all that she has overcome.

You’re planning on publishing a book soon, can you tell us more about the purpose and how the process of writing has supported your coaching?

I want to make sure that people coaching have the resources that they need so that they can coach properly and in turn, more people will stay in the programs, on their teams, in sport. I have a very specific way that I prefer to coach humans and I want others to know about the process.

I have had so many people tell me that I am the first person they have every really learned from and it is because of my coaching style. If a coach can learn a bit from what they read in my book, use it when they coach, and have the same impact on athletes in their program, that will help to keep athletes in sport. I have gained so much from participating in sports and being coached as an athlete, I consider my book to be my way of contributing back to coaching and back to sports. 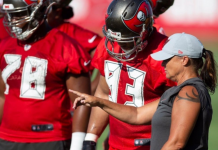