I admit, every now and then I feel wondering eyes looking over, wondering what’s going on. Six foot Three, 110k guy taking orders from a 56kg female coach, something that definitely challenges gym stereotypes.

One – My back is covered.

Boxing is a strange sport and every coach will tell you something completely different. That’s not to say they are all wrong but it’s important that you listen to someone who you know has your best interests at heart. Some people involved in the sport have personal agendas. I know that my coach puts me first. I quite like my face and it needs to last me a while, so having someone in your corner who wakes up to it every morning is a great thing.

If you have a sugar addiction like me then you’ll know how hard sticking to a diet can be. It’s not what you think, the girlfriend/coach situation remains separate and we often devour a family size Tiramisu together even when training for a fight. She reminds me not to feel guilty about food and that as a superheavy weight the odd treat isn’t going to matter. Going at it alone is tough so having someone involved in your training at home is handy, thinking of different ways to eat enough greens and protein actually becomes a hobby I’m sure we will laugh about in years to come. Having mental support at home makes a big difference to a fighters mentality and makes meal times easier. It takes dedication to win and a gentle push away from the sugar in the morning is just what I need. My nutrition when training has never been better. I’ve never been so cut and vascular than when training and living with Rachel. The downside is she knows if I’m ‘cheating’ but saying that, she  is a big advocate of balance and also constantly tells me that super heavyweights have it easy as they can weight what ever they want. I often get a sly comment about not knowing what it’s like to have to make weight. I suppose she’s right but on the other hand she’s never had to worry about the force of a 120kg boxers back hand!

Three – She knows her stuff.

All my life I’ve been involved in sports, I was the guy on every team at school, the one who could pick up a discuss and throw it over the horizon from day one. I’ve been round coaches of all levels so I know mine is one to stick with. Rachel is very technical unlike other coaches I’ve had. Most coaches just want a big guy to hit as hard as they can. Hitting hard is easy for me so it’s the other stuff I need to work on and having a coach who knows you and what you’re good and not so good at makes a difference. Working on skill and technical ability isn’t as satisfying as beating the heavy bag but I can’t deny the results. If she wasn’t my girlfriend I probably wouldn’t have stuck with someone so technical as I initially found it quite frustrating.

Four -Having her in my corner.

Even if she wasn’t a boxing coach, I would want her there. The fact that she’s an England support coach, held a national title and had 40 bouts is the cherry on the top. She knows me and how to communicate to me to get me to preform. I believe in myself and having someone in my corner who does too is important to me. She’s been there, done it and got the T-shirt (which was probably way too big and given to me!). I can’t think of anyone better. We are a team and hers is the voice I trust.

Five – I get special treatment.

She says I don’t (and I definitely don’t in group sessions!) but I get one to one sessions and she plans her own training around mine. She also seems to know everyone involved with Amateur boxing so arranges sparring for me and we will often travel as there are not many superheavy weights around. She does a lot of coaching and personal training and works full time so her free time is very limited. I’m grateful she spends some of it helping me to become a better boxer and I am probably guilty of not telling her that enough.

Negatives – It isn’t always easy though

And although I know I’m lucky to have coaching on tap our busy lives mean training isn’t always consistent and can often be last minute.

I trained with another coach once where all my sessions were preplanned and regular. This was good as I knew each week when I was training and what I could do on my own. I prefer routine but this is almost impossible when both the boxer and coach work unpredictable shifts. We don’t get much free time together and sometimes when we do, we decide that we’d rather spend it as a couple not as a boxer and coach. We will end up on the sofa watching a film instead of in the gym.  She has also been known to say ‘let’s get training out of the way first’ which feels like she views it as a chore. Sometimes her choice of words causes friction and in a normal boxer/coach relationship you leave the emotion at the gym or take it home and vent to a friend or loved one. I go home with my coach and it’s hard to separate any feelings or frustrations we had in the gym.

She also expects more from me than she does does others. I think she is harder on me because what I do in and out of the ring reflects on her even more being her partner. There is no where to hide when you live with your coach, she knows when I’m skipping sprint sessions in favour of a lay in because she’s also still in bed! I’m lucky though as most of the time she will keep me company and push me (or join in) when I’m doing the training I could do by myself.

So you can see, it comes with its problems  but it works and I wouldn’t have it any other way. 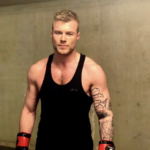