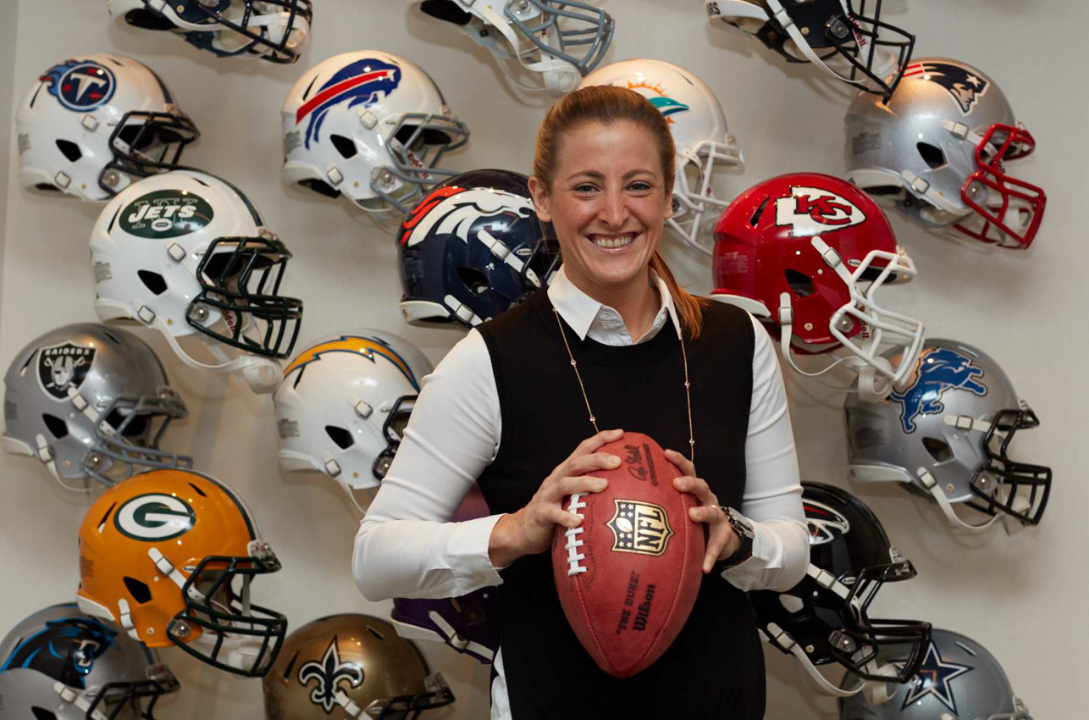 Sam Rapoport is a former American Football player who is the Senior Director of Football Development at the NFL.

In recent years, the NFL has welcomed a host of female coaches and leaders starting back in 2015 when Jen Welter became the first women to be hired as an assistant coaching intern for training camp and the preseason for the Arizona Cardinals. Since then, teams such as the Buffalo Bills, San Fransisco 49ers and the Raiders have all hired female coaches, Assistant Coaches and Strength & Conditioning coaches. Names such as Phoebe Schecter, Kelsey Martinez, Kathryn Smith and Katie Sowers are paving the way to make the NFL a much more diverse coaching environment.

Can you tell us about your role as Senior Director of the NFL?

My role at the NFL is to oversee the pipeline programming aimed at creating opportunities for diverse candidates to enter into NFL football operations positions. The overall mission is to normalise diverse candidates on the sidelines in football.

Day to day I work in an office in mid-town Manhattan in New York City attending several meetings and meeting with my team to discuss different strategies aimed at normalising women and people of colour on the sidelines of football. I also do quite a bit of travelling to the NFL clubs to speak with head coaches, general managers and owners to get their thoughts and opinions on how to move things forward and progress.

How much influence does your role have on individual teams hiring women coaches and leaders?

We created this programming based on the feedback that we got from head coaches and general mangers about their desire to diversify the pipeline into football operations.  The role that the league office plays is to help to provide candidates and then get those candidates in-front of the head coaches and general managers who could potentially gain opportunities within the NFL. But the actual hiring and opportunities are all credited to the Head Coaches and General Managers who are working really hard to put women and people of colour in those positions.

How important do you think it is that teams open their doors to more female coaches?

NFL Coaches and General Managers want to be the best, they believe in the best, so in order to be the best they need to best people working for them. There is no question that you have to consider 100% of the population. If you split any population in half and only recruit from that, you are not getting the best possible candidates for the positions. Our HC’s and GM’s understand that and I think it’s important to consider everyone so we can continue to be the leading sports entity in the Country.

Do you think female coaches are at a disadvantage because they don’t have high level playing experiences like male coaches have?

Playing experience is not a prerequisite for coaching football (or any sport)! Many of our head coaches have told us that the skill of teaching and relaying information to a player coherently so he or she can learn, is the key attribute. It’s what makes a coach and amazing coach.

How did you get into a position with the NFL?

I grew up in Canada and I’ve played football my whole life since I was 12 years old. In my second year of University I applied for an internship with the NFL and was rejected, so I spent a good deal of my third year of University figuring out a way to stand out so my resume would reach the top of the pile of the HR department. So I sent a football with my resume and on the football I wrote, “What other Quarterback could accurately deliver a ball 386 miles. I sent it into Fedex with my resume and it caught the attention of the folks at HR and now I’ve been working for the NFL for 17 years.

What advice would you give to women who want a coaching or leadership role in the NFL in the coming years?

I would say is you have to apply! What we hear a lot from our HC’s and GM’s is that all of the resume’s reaching their desks are that of men. They are not seeing women apply for these positions. It is so incredibly important that you send your resume off for consideration

We also have several programs if you follow the NFL operations twitter account, we post a lot about opportunities for women and people of colour for people to enter into the pipeline in including the Bill Walsh Coaching Fellowship as well as the Nunn Wooten Scouting Fellowship.