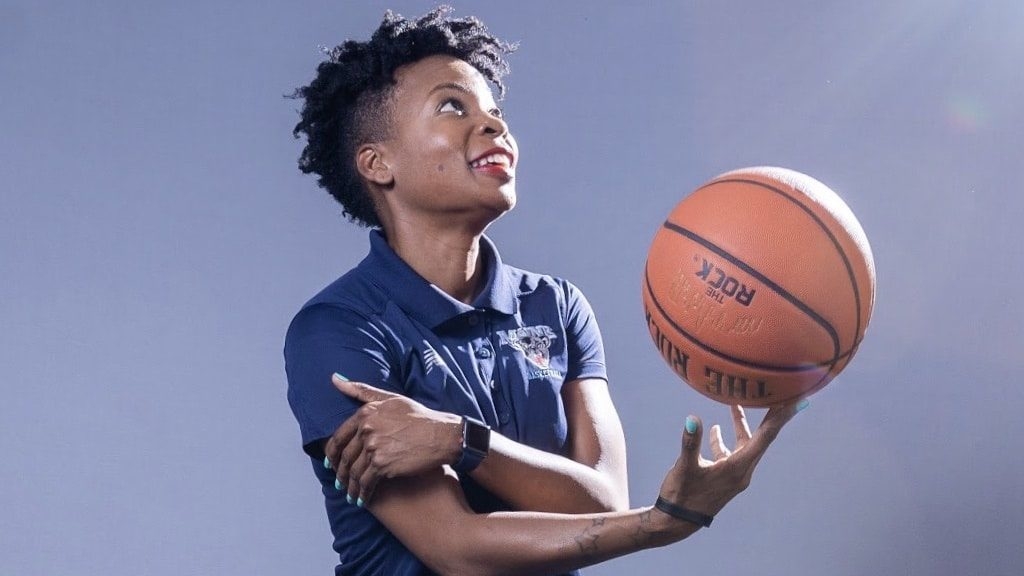 Edniesha Curry is the only female coach within the NCAA Division 1 Men’s Basketball league.  That’s the ‘only one’ out of over 1,300 male coaches.  With that stat, we just had to get in touch with Edniesha and find out more about her story!

As a player, Edniesha played in the WNBA from 2002 with Charlotte Sting, Phoenix Mercury and Los Angeles Sparks and went oversees to play in Greece, Israel, Hungary and Poland.  After retiring in 2009, Edniesha spent some time coaching in Vietnam, China, Israel and Palestine and has been involved in coaching at NBA Jr clinics, NBA Assistant Coach Program, the NBA G-League – this list goes on!

In March 2018, Edniesha was hired by the University of Maine.

On hiring Edniesha, Head Coach Richard Barron said: “Eddie was an easy choice as an assistant coach,” said Barron “She is extremely talented at developing players – especially within the context of defensive and offensive systems. Eddie teaches skills that can be utilized with frequency in a game. Eddie is also great at scouting opponents as well as “self-scouts” – breaking down video to find areas of improvement. She knows Maine, knows many of our players, and knows me and my style of play. She has great connections around the world from her extensive playing and coaching background. Our players will be very fortunate to have someone as gifted and enthusiastic as Eddie coaching them.”

Below, we share with you our conversation with Edniesha as we asked her about how she feels being constantly asked about being the only woman coach in the league and how she hopes her own journey inspired others…

Do you ever get frustrated or bored of being asked what it’s like to be a female coaching a mens team?

I think it’s very important to keep the conversation going.  It not only informs other people that this is actually happening, but I see it front the stand point of inspiring a generation of young girls that are coming up behind me that it doesn’t matter about your gender.  So we need to keep sharing these stories of empowerment and breaking barriers.  That is the only way we can continue to create change.  It‘s so important that we keep our stories alive.

I read in an interview you said “I know eventually there will come a time when there won’t be a bias that leads to questions about women being able to coach men or lead men in basketball or any sport.” What do you think needs to happen to make this reality and who needs to do it?

It‘s all about time.  There are over 1,300 men coaching D1 Men‘s basketball in the U.S and I am the only woman!  It’s just not a norm in society, so the only way we can make it a norm is to keep pushing through doors and inspiring these women to keep having dreams, putting pressure on leadership, Universities and Administrators to hire the best person, no matter what their gender is.

It’s been a conversation piece for a few sports; so I wanted to ask your thoughts in this as you have not only coached both men’s and women’s basketball, but you played in the WNBA as well… do you think some coaches see men’s sports as the pinnacle of coaching and that is their overall aim, to coach in men’s sports?

No it‘s not, I can coach women’s basketball, men’s basketball – it’s not about whether the men’s game is more elite than the women’s game, it’s about opportunity.  When you look at women’s sports and the staff of women’s sports, you see diversity.  Male head coaches, women head coaches, male assistants, female assistants…but when you see men’s sports, all you see is men.  That’s what this is about, it’s about time that the playing field for any male or female if they want to coach, no matter what sport or gender it is, that they get the opportunity to coach, because they are well qualified and this is what this is about.

What’s the stupidest question you get asked time and time again in your role of being ‘the only woman’?

Do you get to go in the locker room?  I respond by saying ‘do you ever ask a male coach if he get’s to go into the women’s locker room?’

And that’s what this experience is about – it’s about changing the dialogue and the stereotypes that people have been conditioned to think about.  These are the crazy things people think will happen if they create a diverse program in men’s sports!

It’s funny because no one ever asks these questions when there is a male head coach and all the assistants or women, the players are women, support staff are women – one man to all those women and no one ever says anything.  But when you turn it around and it’s one woman and all these men – and in my case people ask ‘how are they on the road with you, how is the locker room, hows this hows that, how do other schools treat you, hows the accomadation’. But its the same!!

We are so conditioned to seeing women as a problem and that’s the number one problem!

My guys are awesome, absolutley wonderful, they love me to death, we talk through the good and bad times.  I’m their coach and they respect me. 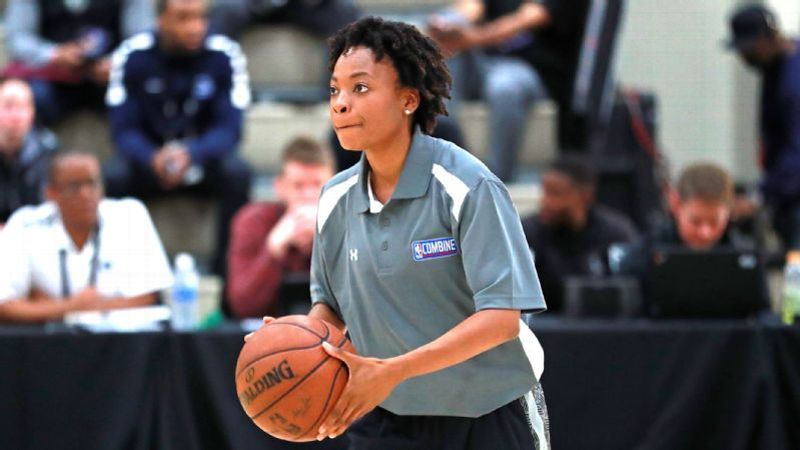 What do you think other women can learn from your story?

I tell all young girls and women that call me, I say ‘apply for the job’.  In reply I then get ‘yeah but they might say no because I’m a woman’… and you know, they might…but you could apply for a women’s job and they might say no too!  As women you have to understand that not all of our rejections is based on our gender.  We have to keep pushing, if you think your qualified, you have to apply.  You can’t worry about being rejected before you have even applied and I think that’s a great point.  You get rejected – you apply again!  You can get rejected in men’s sports and women’s sport!  You are going to have to be OK with getting a couples of ‘No’s’ and not letting self-doubt set in.

Not everybody wants this change [diversity], but it is coming and there are a lot of women out there that are way more qualified than their male peers; we are getting noticed.  We have to use our platform to get noticed and I take my position with great honour because I hope that every time I speak or I’m seen recruiting or coaching, that they are inspired.  I want girls and women to see me and think ‘I can be like her’.

It can be exhausting, with the gender question being asked a lot, but if you want change, you have to be willing to fight and go through it.  I am willing to do it because it’s not about me, it’s about all of us.

How did the role for working in men’s basketball happen for you?

It was just something that happened!  I had just finished my second year of coaching women’s basketball and wasn’t sure if I wanted to go back to Europe and coach or stay in America.  And one of my friends said to me ‘you know you should apply for this program with the NBA’.  I had never thought about coaching in the NBA or in men’s sports before, but I just go with wherever the opportunities come from and just go with it, so I applied and got accepted into the NBA Assistant Coaches Program.  It has been great for my person as a coach, leader, role model.  So I was in this program, the NBA G-League, the NBA combined events and I was at home in Atlanta when Head Coach Richard Barron rang and asked if I would be his Assistant on his men’s team.  I didn’t think about gender at all – I just said yes!

Once I said yes, I then took a step back and thought ‘holy crap!’ I am the only woman.  You don’t realise straight away how the world see’s women in that position until you are really in it.  That’s when I was like ‘holly shit! I am the only woman!’

Do you have doubt or feel overwhelm? If so, what do you do to overcome it?

Wow, that’s a great question.  I think I would be lying if I said I had never had doubt or fear or felt the pressure of this Division.  But I have an unbelievable support staff, friends and family.  The number one person in my life who has always believed in me is my Father.  Having a Dad like I have that gives me all the confidence to achieve, because he has never doubted me.

When I have a bad day, I just go to my tribe of people and talk it through it with them.  It is exhausting, but I have a responsibility in this role so I have to check yourself, and remember how you got there.  Don’t think about how you’re going to move forward or how you may fail, you have to remember that what got you there is what says your good enough.  You have to keep reminding yourself of that. 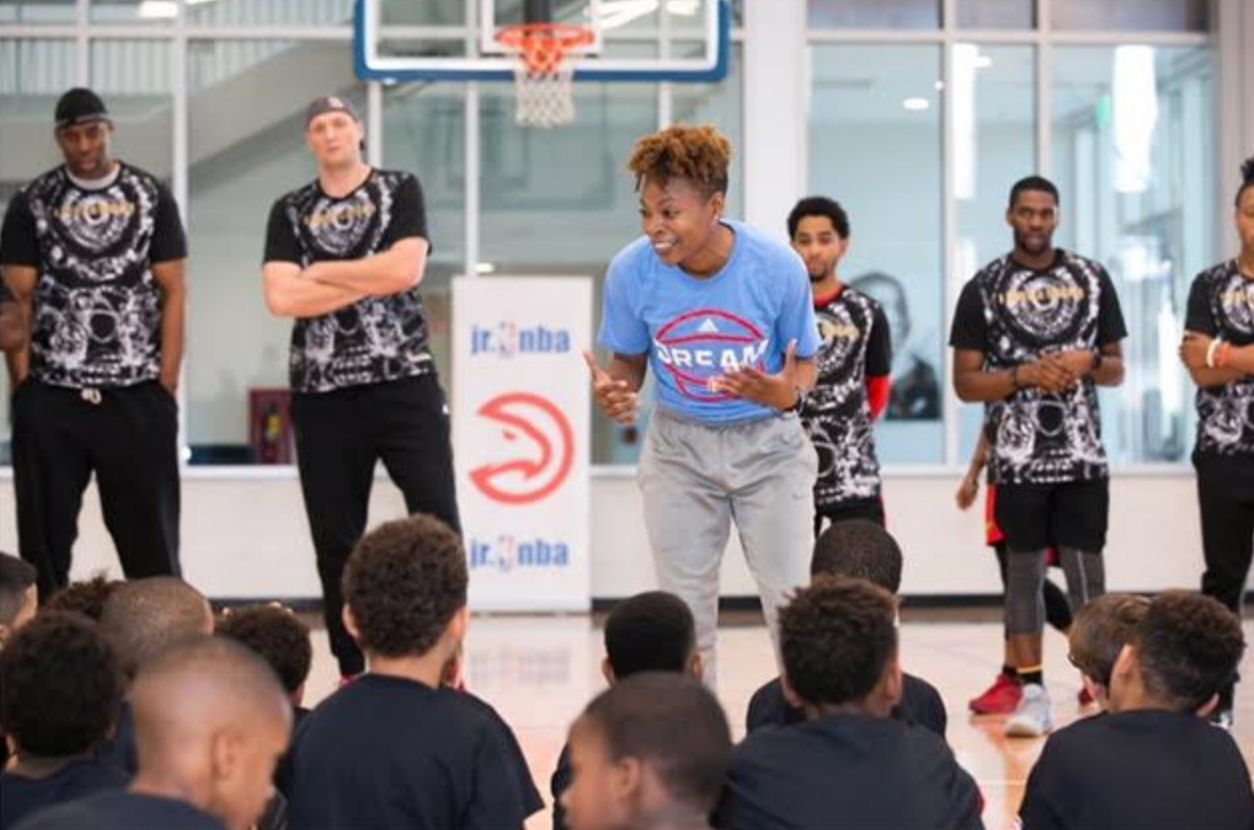 Do you have a routine or habit that you repeat each day that helps you to achieve these goals and keeps you in the right mindset?

I remind myself everyday that this is not about me.  This journey is not about me, this position is not about me…it’s about the legacy that I am going to leave for other girls to have this opportunity.  I also want to leave a legacy for my siblings because I am the oldest of 6.  That is what drives me everyday – my own individual success does not matter, it’s about what I am doing for others.  So when I wake up and I’m tired, I think about the other people that need me and they fuel me every single day.

How do you goal set? And how do you differentiate between goals that un-realistic and goals that you can truly achieve?

I don’t put a limit on what I can achieve.  I set a bar really high and every day I just get better.  If you have the mindset of always learning and you focus on getting better every day, you will take a step closer to your destination.  It’s not about wanting to be here or there in 5 years or 10 years etc…I just want to be my best self every single day.  That way I am waking up with the engery to be better than I was the day before.  I have projects and a things I work on that I need to get done or wanting to achieve, but I can’t achieve them if I am worried about getting there.

What is a successful career for you?

How many people I bring with me.