I have a new pet hate: lazy netball journalism.

It actually started 5 years ago now (wow was it really that long!)  with that Telegraph piece comparing Netballers to dainty flamingoes by that columnist who clearly hadn’t done any in depth research and didn’t have a clue what she was talking about! (The article is here: https://www.telegraph.co.uk/women/mother-tongue/10851468/Obesity-crisis-How-playing-netball-is-making-your-daughter-fat.html )

I guess it’s become more common because Netball has been given a higher media profile. Which is definitely not something to moan about!

The most recent case is the Sky Sports press release announcing Ama Agbeze & Sharni Layton to the Sky Netball presenting team for the World Cup – apparently swapping the ‘defensive quarter’ for the commentary box! I corrected them through Twitter obviously

and ‘quarter’ was hastily changed to ‘third’! Oh, how I wished i’d taken a screen shot! To add insult to injury I didn’t even get a thank you!

Now, I will admit to more than a vested interest: I trained as a journalist and indeed did a ten year stint writing the weekly netball page for local newspaper The News. (Original title, I agree!) I may have even made a ‘proper’ career out of it had coaching not come a calling!

(Little shout out to Portsmouth -based The News here. The weekly netball page has been going for more than 10 years now, great foresight from the Sports Editor and team and testament to the strength of the netball community in the area!)

I have discussed in previous blogs that Netball has evolved, sometimes, it seems, at the speed of light: but our partnerships, infrastructure and dare I say the National media have not really kept up pace

I have made the point on numerous occasions that just because you are a great coach or player, doesn’t make you a great pundit or commentator. If I had, as threatened, played a drinking game, every time a certain coach said ‘erm’ or ‘how do I say!?’ live on TV, I would have been in local A&E having my stomach pumped!

I do tend to put televised netball matches on mute sometimes and long for the nostalgic days of Anita Navin’s dulcet tones. Now there is a netball expert who knows what she is talking about!

Something that really annoys me (and I know other netball fans too as it is often commented on in social media!) is commentators using ‘points’ instead of ‘goals’. For example ‘what a great point from Jo Harten, from the edge of the circle’ or ‘Vixens lead the Firebirds by 6 points at the half way mark’. Usually used by those less experienced in the Netball world – but still, a quick conversation with those with more netball knowledge before broadcast, would see this completely eradicated!

There are, obviously I hope, exceptions to these rules.

Caroline Barker comes across as an absolute consummate professional who seems to go above & beyond with research and preparation. In my eyes (and ears) Barker’s commentary, along with Sara Bayman, on the Commonwealth Games 2018 Final, was as near to perfect as you could possibly get. (As I get misty eyed again!)

I have followed Denise Evans on Twitter for as long as I can remember and let out a silent ‘yes’ & fist pump when she announced she was walking through the BBC doors for the first time as an employee in the role of Netball journalist! I believe, Denise, took on Manchester Thunder’s media role for years and it seemed ‘just desserts’ that she should rise to the giddy heights of the BBC, a leading example  for youngsters who can can dream of career in netball journalism! 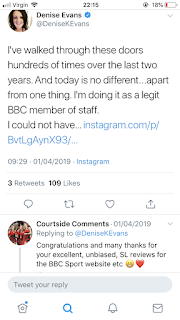 I listened with interest and surprise recently to the Netball show’s chat with Hazel Irvine – who will be the BBC’s anchor for the Netball World Cup coverage. Hazel told of her history with the sport and the fact she actually covered the 1995 World Cup in Birmingham! She clearly knows her Netball and I look forward to watching and listening to her in less than a couple of weeks time!

There is a simmering debate in Australia, at the moment, about the role of male commentators in the game. For me, it’s not about gender it’s about who can call the game fairly & squarely, in an entertaining and informative way.

It’s one reason I am personally gutted Suncorp Super Netball’s Sue Gaudion hasn’t been snapped up for the World Cup. She is first class and broadcasters have missed a trick not sending her to
Liverpool.

So, what I say now to all commentators, journalists and netball pundits I say from the heart in the best interests of netball!

PLEASE Do your research, be prepared and know your stuff.

Sky / BBC give your experts some training so the audience isn’t baffled / annoyed at too many ‘erms’, bad pronunciation of netball superstars’ names and long boring pauses!

Netball is a fantastic, technically amazing and exciting sport. There are some real characters in and around the courts and this is going to be the most exciting World Cup EVER.

It deserves the very best commentary and journalism you can offer!

Author: Debbie Laycock is a UKCC Level 2 qualified coach and has experience in coaching netball to participants from 2 years old to 102 years old, from grass roots to performance pathway athletes. Her passion for the game is infectious and she has held done a number of professional and voluntary roles in coaching and organisation.  Debbie is also a ‘C’ Award umpire and plays netball (when not injured) for Meon Netball Club in Hampshire.  Recently Debbie has set up Netball in the Community; giving netball opportunities to the people of Portsmouth and Coaches Network;  a supportive space for local netball coaches to share best practice, gain support and help each other out, on their netball coaching journeys.  Debbie will be at the Netball Work Cup in Liverpool and looks forward to catching up with the netball family, as well as seeing England take Gold!

DOHA 2019: The Woman Behind the Refugee Athletics Team