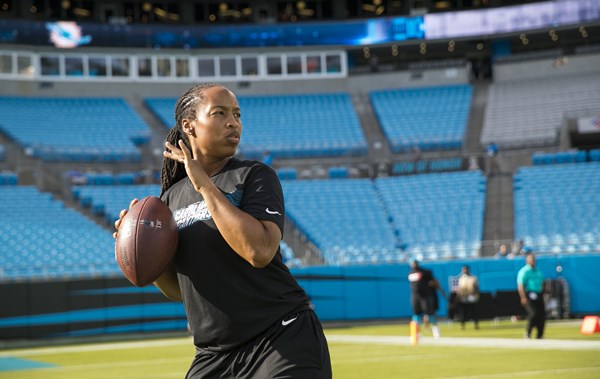 Jennifer King is an Intern Running Back Coach for the Carolina Panthers – one of the very few female coaches who is or has been part of an NFL team.

We first interviewed Jennifer back in July 2015, when she was an assistant basketball coach at Greensboro College, USA, because nobody would let her coach football when she began her career.  Jennifer became a women’s basketball coach and was brilliant at it,  working her way up to the head coach at Charlotte’s Johnson & Wales, which she led to a national title last year.

In the background, she studied football, and loved it more and more as the years went by. She has played quarterback and wide receiver in a women’s tackle football league for nearly a decade, and the more she learned, the more passionate about the sport she became.

We caught up with Jennifer to find out how she went from coaching college basketball, to coaching football in one of the biggest sports leagues in the world.

Congratulations on your internship! You wanted to be a football coach for a long time, what was it about basketball that was more accepting of female coaches than football?

Women had played basketball and coached basketball for a long time, so it was kind of the norm already.  Football is a different story because at the time there were no women coaching. So it was hard to fathom that it was actually possible to coach in the NFL as a woman.

It’s an interesting question and I’m not sure I really know.  Sometimes staff numbers are limited in collegiate and high school sports, so sometimes they feel they need to find someone with more experience so they can have less coaching staff… possibly?
At the collegiate level (at the top divisions anyway), their budgets are pretty much unlimited so I don’t know why they limit staff.  It will be interesting to see what happens when women first break into the college ranks.  I know one right now and that’s it (Edniesha Curry – check out her interview HERE).  I think it will happen, it might be some time yet, but it will. 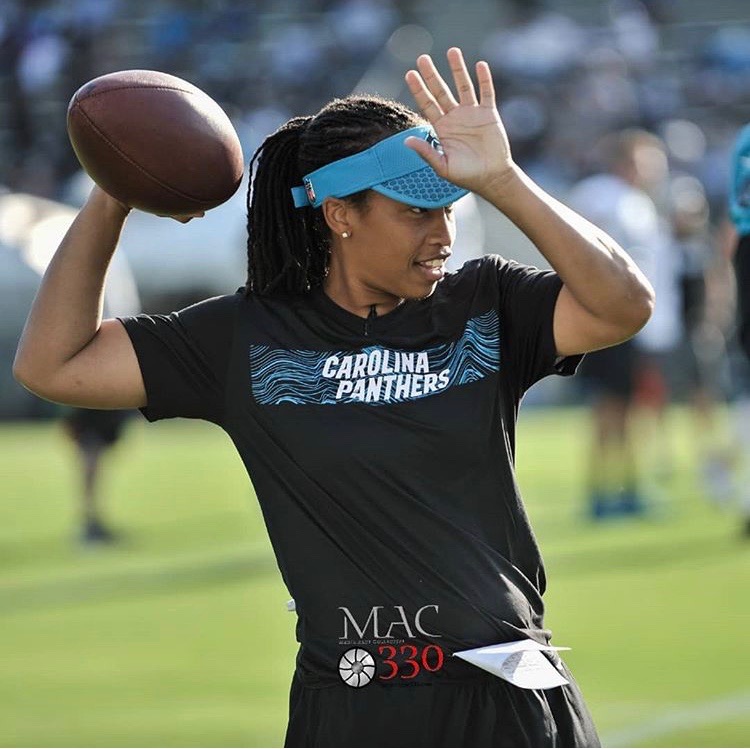 Was there ever a time when you mentally gave up on the idea of coaching in the NFL because it seemed like too big a leap from you coaching basketball?

I’m not sure I ever doubted it, but it was maybe on the back burner just because I was coaching as an assistant for 8 or 9 years and then when I became a Head Coach, there was so much responsibility that my NFL dream was put on the back burner.  I had to make sure my team was ready to play etc…there was just more things going on at the time which needed my attention and focus.

This is your second stint with the Panthers as Intern, is there a difference between what you are doing now to what you did then?

Last time I was working with the Wide Receiver positions, this time I’m working with the Running Backs, so I have switched positions which is great.  I have pretty much always worked with Wide Receivers, and now I get to work with different positions with the Running Backs.  I have learned a lot, working with this new position you have to know a lot more about Offensive Line Play…if anyone knows anything about Football, Offensive Line Play is where everything starts.  Good and bad!  So I have learned a lot more about that.  It’s been great so far.  I hope I can grow into a full time position – because this is making more well rounded, I am learning another position as well. 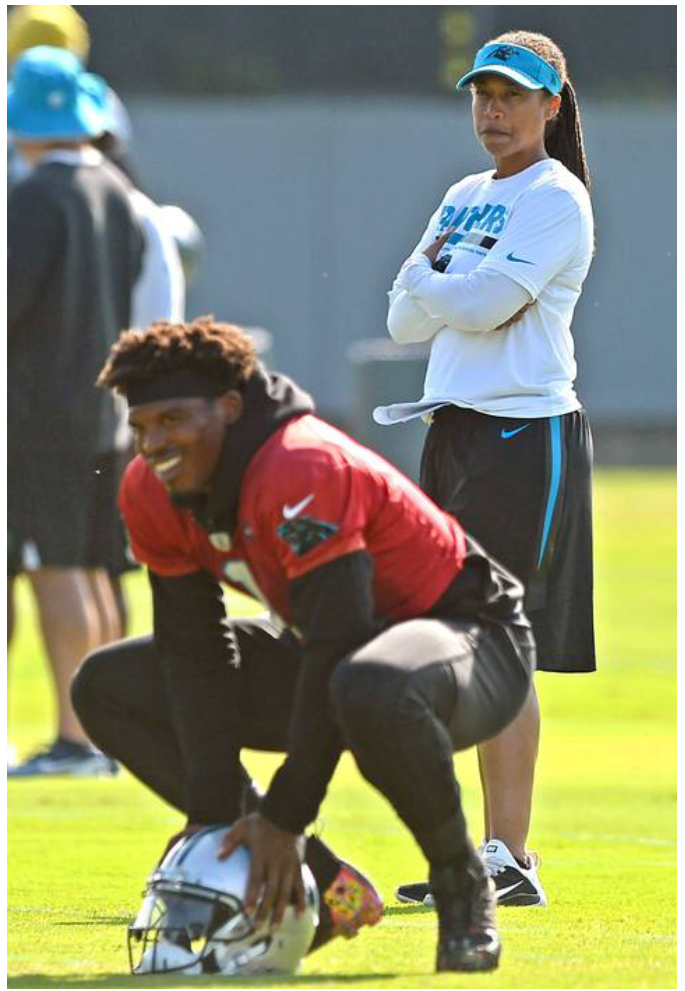 It’s a little shorter in the off season than it will be when it all starts – but in the off season my days start around 7am.  We have practice at 8:30 – 10:30.  Then after that, coaches watch film and we then bring the players in to watch film.  We meet as an Offensive group and then break into our position groups to watch film.  The Veterans actually have a time limit that they can be in the building, so they leave and then the Rookies sometimes have more in-depth sessions.

But usually in the Off-season we get out of their around 5pm or so.  But once training camp starts and the season starts, days are done when the work is done.  So they may become 12 hour days or more.

Have you ever had an outer body experience where you have stopped and just thought ‘wow, I’m coaching in the NFL?’

I felt like that happened the first time I had my internship, now it’s just the norm!  But sometimes you do sit back and just admire the athleticism and the skill of the players – so I do that more to be honest.  They are so good at that level! 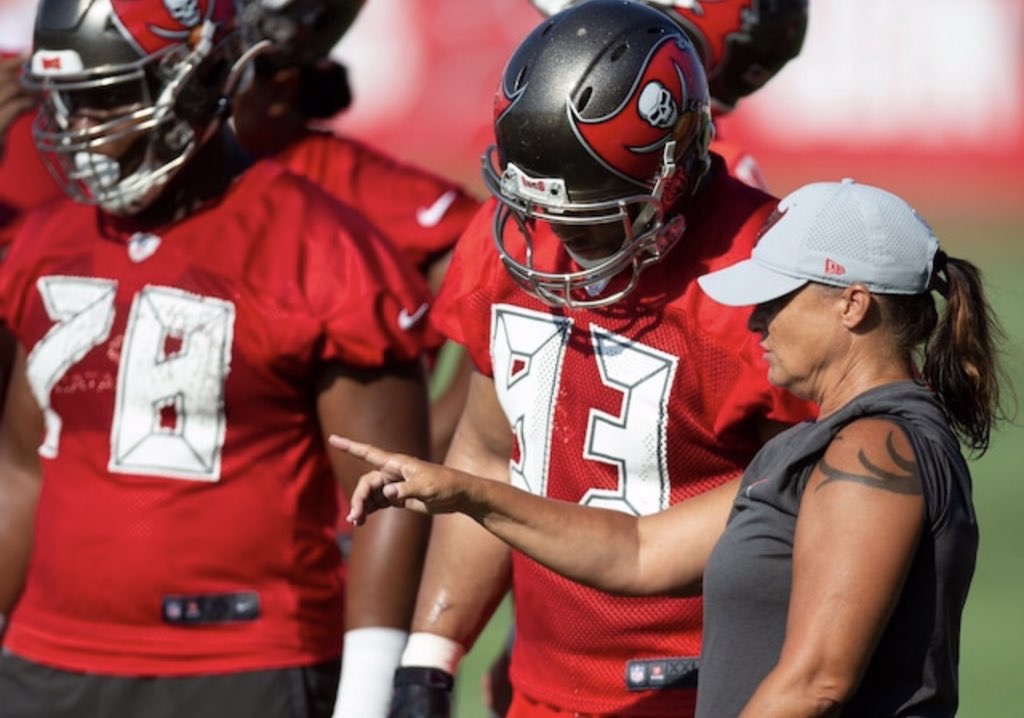 What does it mean to you having other women coaches in NFL teams?

Me, Lori Locust (from the Buccaneers) and Katie Sowers (from the 49rs) have a group chat on Whattsap and we talk all the time.  I think it’s important.  Katie has been doing this in the NFL longer than we have, so sometimes we asked her questions, or we just see how the other person does things and bounce ideas off of each other etc.  So it’s cool to have others in that division.  I can’t imagine doing it alone without someone else to talk to about it all.