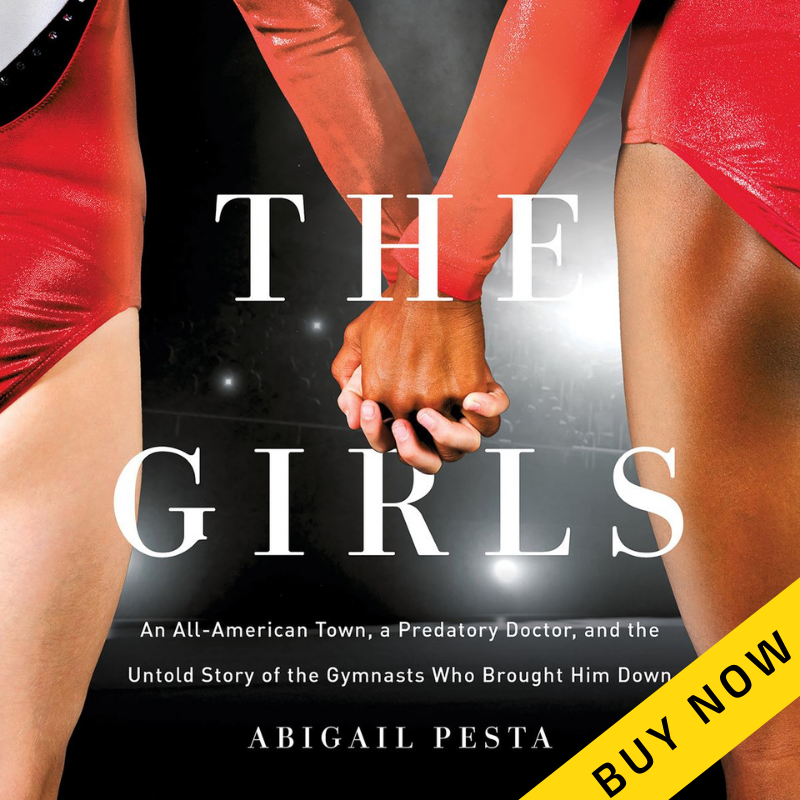 I have to admit to not looking forward to reading this book. Having followed the story on the news from a far, I was already shocked to the bones as to the evil that these girls had gone through. Having cried at the TV watching Jamie Dantzscher and others bravely stand up in court and read their statements, I knew this book and their stories would be a tough one to read.

Before opening the book, I was in contact with the author Abigail Pesta, sharing my confusion with her as to how something like this could happen. Having interviewed all these women to write this book, she was able to understand how such things could happen much more than my naive brain could deal with. In helping me to understand, Abigail described to me how, as young girls, they felt brainwashed, as they started out in the isolating world of gymnastics as toddlers.

From then on, I felt that in someway, I owed it to Abigail and the women involved to read the book and to ensure that as many of the FCN’s network knew about it.

Parts of the book were incredibly difficult to read.  The truth is, I had to skip a few paragraphs here and there.  Abigail Pesta has quite rightly told each of the gymnasts stories wholely and truthfully, resulting in some haunting stories.

From a journalistic point of view,  I cannot imagine what it must have been like for Abigail to hear these horror stories from these brave women and then to deal with the pressure of retelling their stories in this way.  I congratulate Abigail whole heartedly for her work in this.

I then think of the gymnasts, and how they must have felt sitting with Abigail, telling their stories and re-living the images and emotions, knowing that it was all going to be published in a book for the World to read.  I cannot use the word brave enough in this review.

The work that Abigail Pesta has done with this book is incredible, to tell the stories of these women and girls exactly the way it needs to be told.  Not to shy away from detail, not to shy away from the impact of what they went through.

I honestly think that this book is one that every single person who works in sport should read.  Why?  Because every administrator, development officer, admin staff, CEO and coach needs to know what can happen if heads are turned the other way.  They need to know exactly the devastation, the pain and the destruction that can be caused by the simple act of ignoring.  Some need to be reminded that if it wasn’t for the athletes, the human beings that perform their sport, they would not have their jobs.

Abuse in sport is rife.  It is rife with young boys, young girls, grown men and grown women.  Whilst the Larry Nasser case is one of the extreme cases, it also highlights throughout the book the different kinds of abuse that can happen (and does happen) in sport.  Some have experienced psychological abuse and some physical abuse…all in the name of sport.

Early on in the book, Abigail retells the story of Sara Teristi, a woman, who now in her 40’s, was a young gymnast in the late 1980’s and 1990’s.  Sara, it seems, was Larry Nasser’s first victim, but another character, who also abused her, was shared.  John Geddert was her coach at the Great Lakes Gymnastics club.  Sara describes some of the treatment she received from him:

” ‘If you said you were hurt, you were called a liar.’ She saw girls training with bloody sores on their hands, broken fingers and toes.  She got used to seeing things like that.  She got used to the shouting, the insults from the coaches.

“I was sprinting at full speed and he shoved me mid sprint.  I tripped and went flying sideways, landing on the steel cables supporting the uneven bars.”

Having returned from 6 months off after breaking her sternum during a routine, she told John that the Doctor had told her to take it easy.  He of course had different ideas telling her on her first day back “doctors don’t know what they are talking about,” and making her pick up exactly where she left off.  Having fallen during a move, on landing on her hands and knees she recalls: “He was sitting on my back, riding me in a sexual way.  He wanted to humiliate me because I didn’t land on my feet”

Even in this one chapter, there is so much to share to shock you it’s just incredible.

I could write for pages and pages about the disgraceful behaviour of US Gymnastics, Michigan State and US Olympics Committee all described in this book and on endless pages on the internet.  How they abandoned these girls, looked the other way and in some cases, facilitated the abuse, but I will leave that to Abigail.  In a beautiful, compassionate and refined way, Abigail tells the stories exactly how they happened.

Congratulations to Abigail Pesta on this incredible book, but more importantly, to the hundreds of women who stood up to evil and brought it down.  In the words of Abigail; “Their story is the triumph of the human spirit”

If you work in sport, please read this book.