Phoebe Schecter is an American Football Coach and player from both the USA and Great Britain.  Phoebe moved to Cheshire, England from Connecticut, USA in 2013 to work for a member of the Dutch Olympic equestrian team.  It wasn’t until this move, that Phoebe fell in love with American Football.  She joined a women’s football team as a Defensive Linebacker and got the bug for contact sports.  Having competed and captained the GB team, she also became Captain for the England team at the World Kabaddi Championships!

In 2017, Phoebe took an internship role with the NFL team the Buffallo Bills.  She admits to feeling a little daunted during her first internship and was concerned about the players not respecting her

“So he [the Head Coach] took my highlight reel and showed the guys. They were like, ‘That’s sick, she’s better at tackling than us,’ and since then they’ve been so supportive, some sending over videos for our GB teams wishing them good luck.”

We asked Phoebe how she went from playing for the GB team, to coaching at an NFL team in less than 4 years:

My coaching journey began officially three years ago, but it stemed from the idea that I knew I wouldn’t be able to play forever.  I got involved with a youth team not far from me, and started coaching with them.  That escalated into my first internship at the University of Laverne in California.  After experiencing that atmosphere, I knew that the all encompassing commitment was exactly what I wanted to be in and thrived in.

From there, I applied to the Bill Walsh Diversity Fellowship after my mentor Sam Rapopport recommended I do so.  Amazingly, I got that opportunity to work with the Bills, which led me to work at the University in Rhode Island called Bryant University and I stayed with them for a season.  The following Spring I did an internship with Stanford and reapplied to the Bill Walsh Diversity Fellowship with the Bills again and was able to stay on for the season.  So it’s all been a bit of a crazy rollercoaster!

Can you share with us the process of applying to work with the Bills through the Bill Walsh Diversity Fellowship?

I attended the NFL Careers Forum which was put on during the Women’s World Football Games.  It had some amazing speakers including Ron Rivera (Carolina Panthers Head Coach), Scott Pioli (Assistant GM at the Falcons) and Kim Pegula (Owner of the Buffalo Bills).  I had the privilege to talk to a few of these people, but more importantly, I was able to be directed to the Bill Walsh Diversity Fellowship – essentially it is a Gateway into getting into the NFL.  You choose 5 different teams you want to work with, I chose the Falcons, Bills, Panthers, Rams and the Lions, and then you wait! I heard back from the Falcons and had an interview with the Bills.  It was a gut feeling to go with the Bills.  Coach McDermott and his staff are incredible, so to be able to work with them was huge for me.  I went on to training camp two years ago now and this past year I reapplied through the same process and from there Coach McDermott asked me to stay on for the season.

What was that feeling like standing on the sideline of your first NFL game as a coach part of the team?

It was an absolute ‘pinch me’ moment! To stand there amongst these incredible coaches and athletes and all the staff, you just feel so unbelievably humbled by the whole experience.  To look around and see where you are, to have the fans cheering..it’s incredible.  I feel so fortunate to say that I have been on a side line for an NFL game.  But it is definitely something that I will always remember. 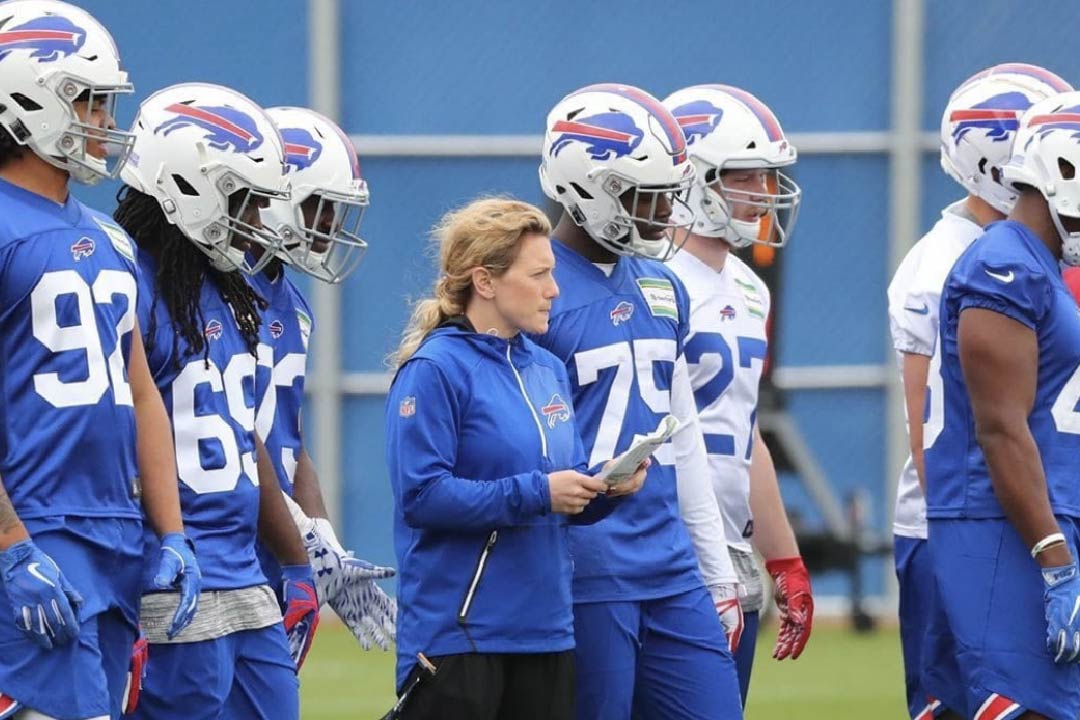 What has your experience as a whole been like as one of the few women coaching in the NFL?

For me, I have been very fortunate to have been involved with the programmes that I have.  They have been so progressive and forward thinking that it’s never been an issue that I am a female.  I am a coach who is just wanting to learn.  That is one of the big things I take away from it; be confident in what you know, but also be confident in what you don’t know.  People take to you a lot better when they don’t think you’re trying to outsmart them or be someone that you’re not.  You can’t be disingenuous, because then no one will trust you.  It’s definitely a very special sisterhood that we are creating in regards to working within the NFL.

For me its incredible to watch all these women out there – like your Sarah Thomas, Katie Sowers, Kathryn Smith – who was especially inspiring for me as she was the one that paved the way for me at the Bills!  I’m very very fortunate to have this opportunity and I want to make the most of it so that this sisterhood can grow even more and more women can get involved.  The women who are involved, whilst we may have had a little help in getting into these positions, we have had to earn it and work very hard to get to where we are now today.  I love learning from everyone else and I love the support we are able to give each other.

What are your coaching goals long term?

I want to continue my path in being the best coach I can be, whatever level that may be at.  Working in the NFL and for the Bills in particular, it’s an incredible culture and a great atmosphere, the direction they are heading is very very positive.  Coach McDermott is an amazing leader, and to be able to learn from him and how he handles situations has been huge fror my development.  All of his staff are great teachers!  So if I can continue to keep working with the Bills, or even when I’m back in the UK to keep working with the National programmes, hoping to build up the standard of coaching within the UK – I would love to do that. I just want to be around football all the time and I want to help others develop as well!