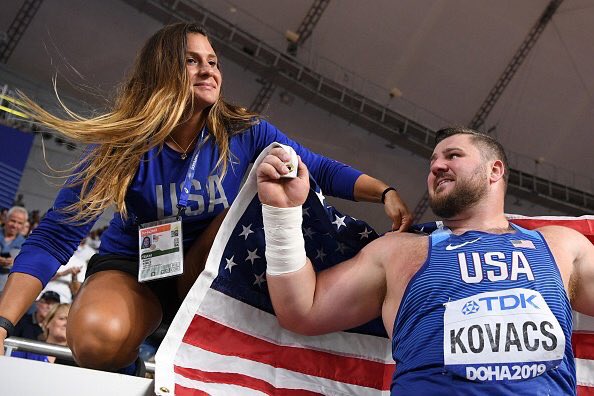 Joe and Ashley Kovacs are the Shot Put duo who together, won the greatest shot put competition of all time!

Joe, who is coached by Wife Ashley, won the contest by 1cm in his last throw of 22.91m to push fellow American Ryan Crouser into the Silver Medal position and World Indoor Champion and New Zealander Tomas Walsh down the medal table into Bronze.

With his last throw, Joe launched the 16 pound ball into the air for a PR and moved himself from 4th position to first.  His 22,91m throw was the furthest throw for over 29 years.

As soon as the medals had been decided, Joe ran into the crowd in the Khalifa Stadium to find his wife and Coach to enjoy the celebrations along side her.

It was only last year that Joe had considered retiring from the sport, but thanks to the support of Ashley, she convinced him to hang on in just a bit longer.  Whilst Joe had been dropped by Nike and was no longer being invited to compete on the Diamond League circuit, Ashley continued to remind Joe of their ultimate goal of competing in Tokyo at the 2020 Olympic Games.

Ashley is in her fifth season as an assistant coach with the Ohio State track and field program. She mentors the Buckeye throwers and serves as one of the team’s recruiting coordinators. During the 2018-19 indoor and outdoor season Ashley was responsible for the training and guidance of Sade Olatoye, a throws specialist who’s legacy will be tough to follow. During the indoor season Olatoye was placed on the Pre-NCAA Indoor Watch List for The Bowerman– collegiate track & field’s highest honor

Congratulations to both Ashley and Joe – see you in Tokyo!