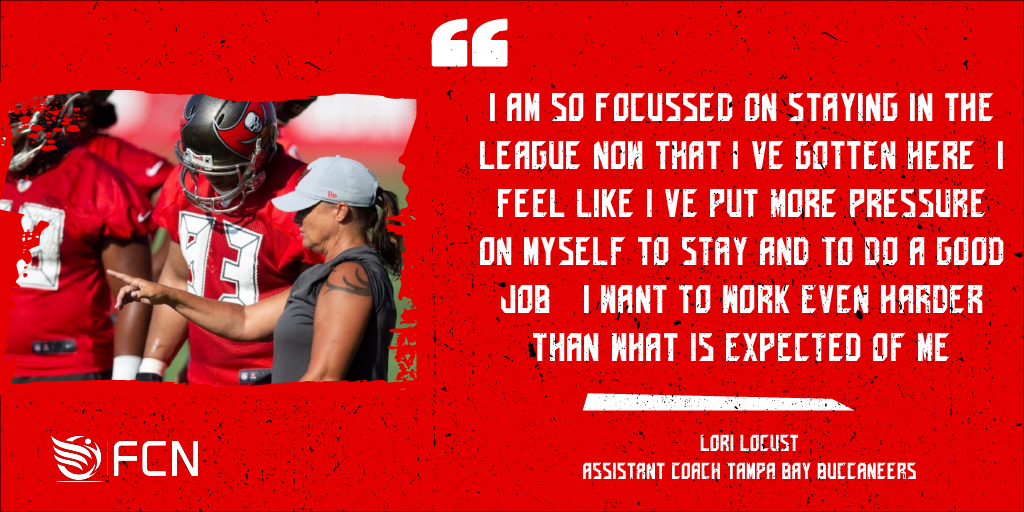 Sunday 13th October 2019, saw the second NFL Game of the season taking place at the brand new Tottenham Hotspurs Stadium in London, UK.  The Tampa Bay Buccaneers took on the Carolina Panthers in a must win Game for the Bucs.

With the arrival of both teams in England, the FCN (also based in England) could not turn down the opportunity to meet with a very special coach from Tampa Bay…Coach Lori Locust.

The FCN first interviewed Lori back in April 2016, when she was coach to Central Penn Capitals, a mens indoor team based in Harrisburg, Pennsylvania, USA.

In the interview, Lori shared with us her journey so far, how she became a football coach and her current coaching ambitions:

Having enjoyed a very successful semi-professional playing career for Harrisburg Angels and Keystone Assault (women’s team), where she was voted MVP (Most Valuable Player) in 2007, Lori then made the transition into coaching.

Remaining within the woman’s game, Coach Lori was appointed the Head Defensive Line Coach at Keystone Assault, a position which she held for 4 seasons.

During this time her dedication, ability and undoubted talent for coaching brought her to the attention of the men’s game and in 2013, she was appointed Assistant Coach for Central Penn Piranha.

Not content with just coaching, Coach Lori has delivered workshops focusing on the Defensive Line in terms of both positions and line play as well as being a published author, featuring for American Football based magazine Blitz.

Lori finished her first interview with the FCN by saying:

“I would love to be an assistant coach in the league (NFL), that would be a dream come true!”

Fast forward to 2018, when Lori served as a Defensive Coaching Intern for the Baltimore Ravens during the team’s training camp and, from 2017-18, worked as a defensive line/linebackers coach and co-special teams coordinator of the Lehigh Valley Steelhawks of the National Arena League.

In 2019, Lori was appointed as Assistant Defensive Line Coach for the Tampa Bay Buccaneers, achieving her coaching dream.

Read our second interview with Lori pre-season from August 2019.

Now half-way through her first season in the NFL, Coach Lori has continued to inspire and raise the bar for others wanting to walk in her shoes.

Lori sets the example for other coaches, quietly sending out the message that being chosen to coach at this level is not the achievement, it is simply the start of a journey that she intends to make the most of and keep.

“I am so focussed on staying in the league now that I’ve gotten here, I feel like I’ve put more pressure on myself to stay and to do a good job.  I want to work even harder than what’s expected of me because I don’t want it to just go away.  I want to make sure that I am not only just living up to expectations that they had when they brought me in, but I want to make sure that everything that I am putting time into is going to be of value to the team.I know people have said ‘wow, you’re in the NFL, have a great time and enjoy it!” but in my head I’m thinking ‘yeah, I love this and I love what I do, but do you know how much work I have to do!”

Back to the game in London, Lori and the team arrived early on the Friday morning and headed straight to the Blackheath Rugby Training ground to get in some practice.

After a day or so of working hard, a couple of hours of sightseeing, the team where ready for their ‘home game’ at the brand new Tottenham Hotspur Stadium. 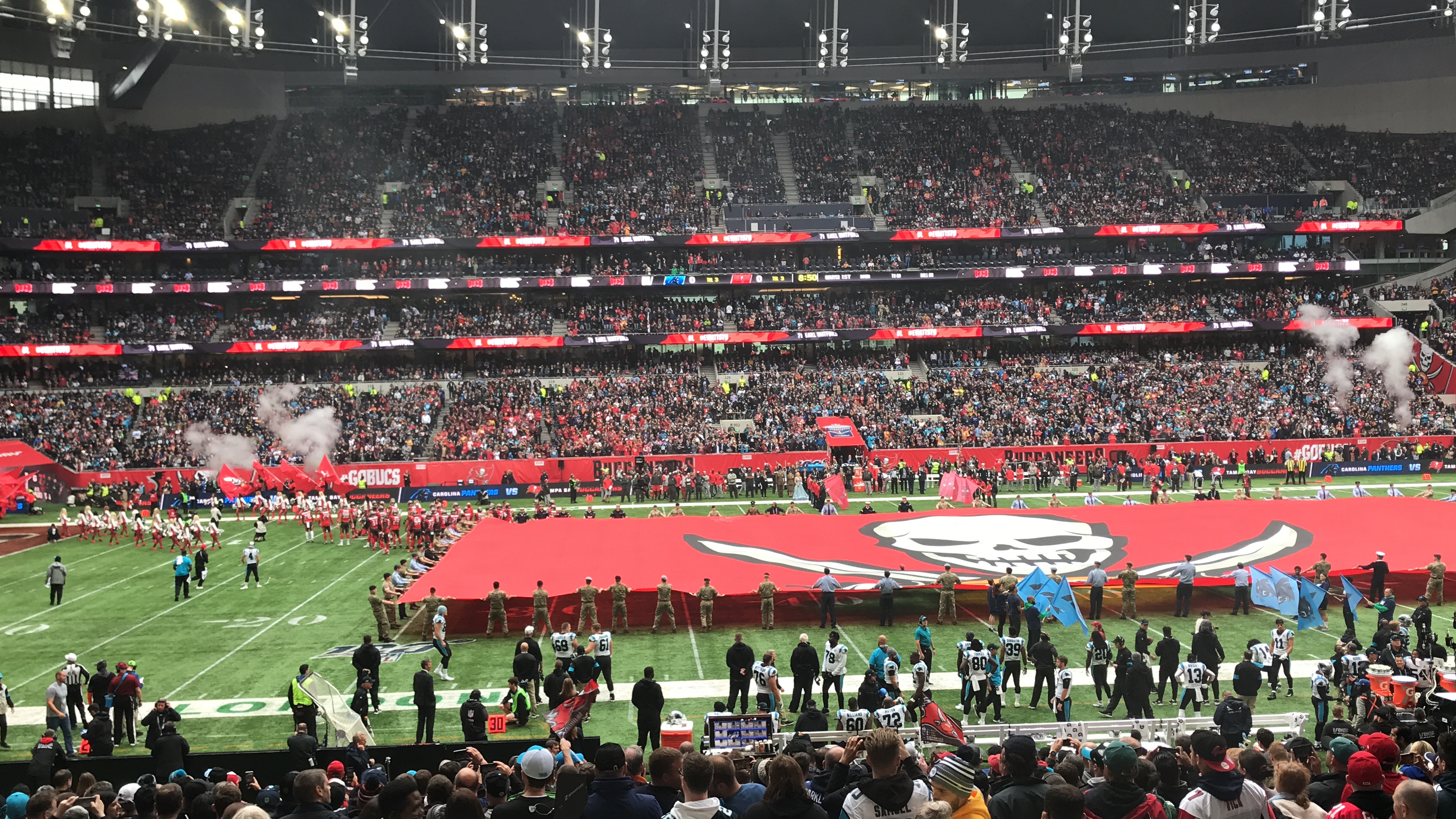 Before the game began at 14:30 local time, FCN Founder Vicky, who attended the game managed to find Lori and finally after nearly 4 years of speaking over the phone, had chance to meet in person. 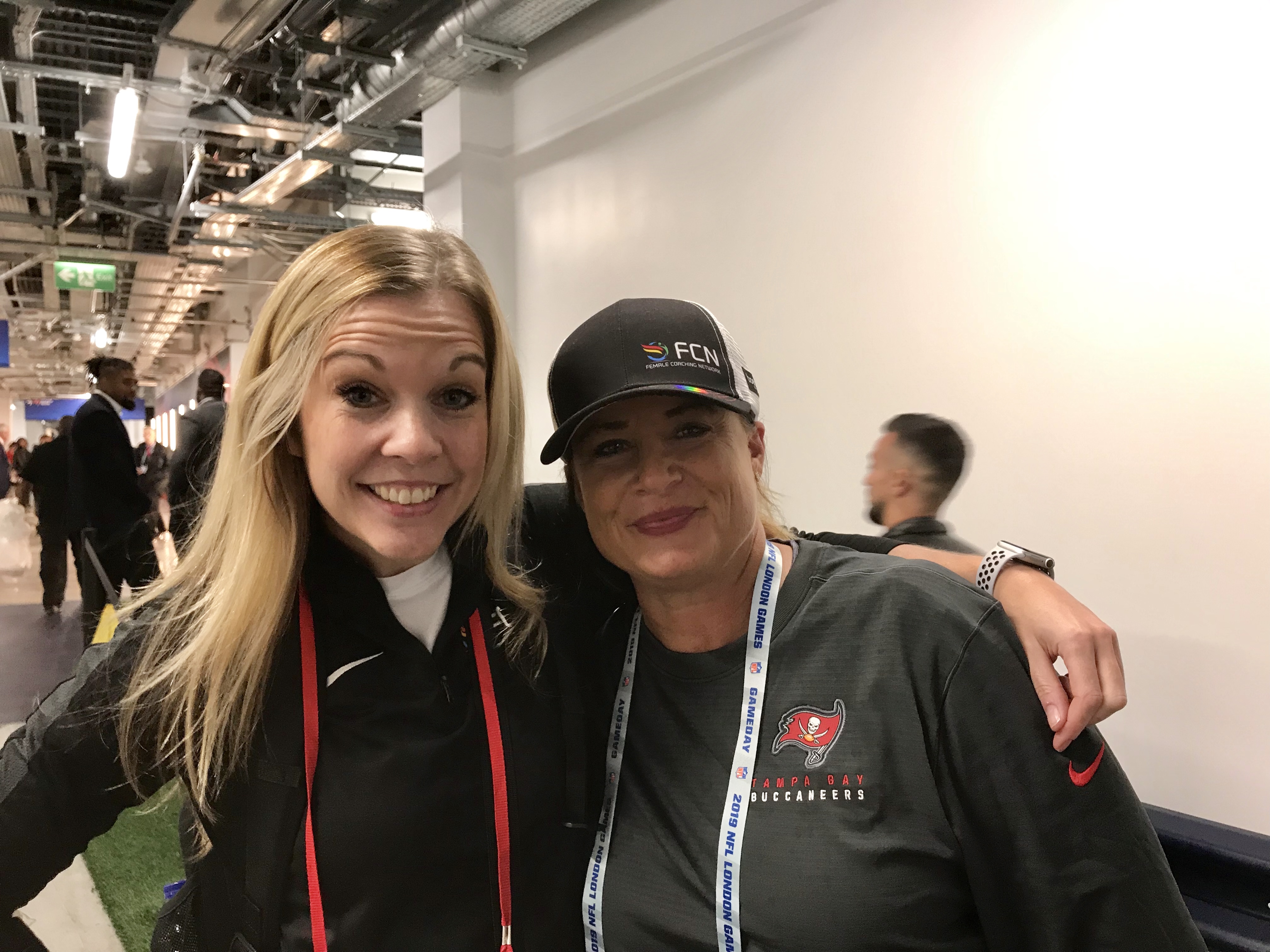 FCN Founder Vicky & Coach Lori – before the start of the Game in London.

The game itself was a little up and down for the Buccaneers, and unfortunately ended with a result that has put serious pressure on the team for future games.  To read the full Game report CLICK HERE

After arriving home back in Florida at 3:00am on Monday morning, the Coaching Staff were back to work at 7:00am getting ready for their next game against the Tennessee Titans.

Best of luck for the rest of the season Coach!

Keep an eye out over the coming few days for a JRW Media FCN Mini-Film about our experience.